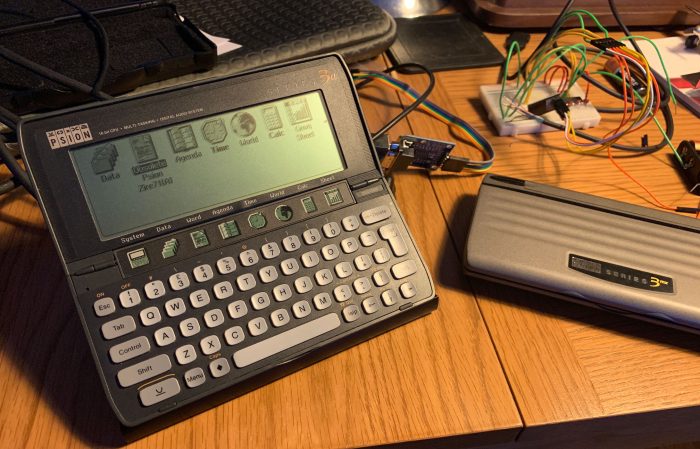 I recently decided to dig out my old Psion 3a palmtop from a storage box at home and I’ve been somewhat obsessed with it lately. When deciding to chuck something away, the tidy- living guru Marie Condo asks “Does it spark joy?”. So I looked at my 25-year-old obsolete Psion and thought yes… Yes it does, it sparks considerable joy.

Ahead of its time

The Psion was way ahead of its time with many features that the iPhone has only just recently received in the last 5 years or so. Features such as copy & paste, file management, printing, multi-tasking and all powered by 2 AA batteries! Something that is incredibly refreshing is the flexibility of the OS – just about anything can be tweaked with a specially written Assembly driver which is a huge contrast to the iron-clad security of iOS. This flexibility might also just be its salvation from an e-waste recycling future.

For all it’s great qualities however, the Psion has a limitation beyond just being old which is preventing it from being relevant today – it arrived in the ’90s. This was before the internet had taken off, before USB and even more critically before Wifi or Bluetooth. Connectivity revolved around a special cable with a chunky and expensive microprocessor in the middle to convert from its propriety serial format to RS232 serial (standard COM port serial to most people). Couple that with PC software which only works on Operating Systems of the ’90s and you’re left with a device trapped on a modern-day digital data island. It’s unusual in this day of age to be looking at documents you’re writing on a device and realising there is no reasonable way for you to print or send it to yourself. Modern computers don’t even have serial ports anymore, there are no USB ports to connect a memory stick and there’s not even basic Bluetooth access that would allow you to transfer a single file. Even if you did get it to a modern device, you’d find it hard to open the many long-forgotten document formats.

It was this realisation that brought me to my current obsession – at first, I was just trying to get access to my old data but it soon became more involved. I started running old apps I hadn’t used for decades and to my surprise, many were still useful, in fact some were better than on modern devices due to the horizontal screen and keyboard – especially word processing and spreadsheets. This device really did spark joy and I began to wonder how I could reintegrate it back into my digital life but why has it been consigned to the storage box in the first place?

What makes a device obsolete?

The Psion 3a was old technology when I last used it in 2004. It was considered by many to be obsolete because new technology had replaced it many years ago. I’d found the marketing allure of the Palm Zire 71 too tempting. When I switched on my Psion after all these years, I found a document listing key points of the new device I was interested in – frozen in time!

Back in 2004 MP3 players were all the rage and most PDA’s had MP3 support. Many also had colour screens, cameras, built-in LiPo batteries and modern features such as USB docking. Best of all the Palm Zire supported email out of the box! It was not perfect – the camera produced pale, washed-out photos and you could only hold about 8 songs without an expensive SD card on it but compared to a device long abandoned by its makers it seemed like the cutting-edge future. Indeed many of those features you can still find on a device like the iPhone today but obviously refined. Still, take away the allure of a new device and the Psion still had a keyboard and considerably better battery-life, not to mention a better OS. There was something else making this device “obsolete”.

I’m going to make a bold statement. Technology advances at such a rate even new devices are using “old” technology as soon as they are produced. This is because affordable components don’t always translate to bleeding-edge technology. Take the Game Boy for example. It’s now a classic icon but many at the time considered it dead on arrival as it had a black and white screen when colour was possible, yet this made it affordable and easy to mass-produce. Nintendo supported the device for over a decade and it was as popular as ever. It’s easy to forget that the most popular game for the Game Boy – Pokemon Red & Blue arrived in the UK *9 years* after the device was first launched. It became “obsolete” when Nintendo withdrew support and game makers stopped making new games for it. It no- longer fulfilled its need to entertain and that is what ultimately made it obsolete for many.

So with that in mind perhaps my Psion Series 3a started to become obsolete when Psion released the Series 5 and so it became unsupported. New accessories which would have extended its life would have prevented any potential Series 5 upgraders from having a reason to upgrade and so it had to die. Without official support, users moved away and with that, 3rd party developers moved away too. Soon you have a device with old software that no-longer fits your needs and it’s hard work getting the data off – that’s when it becomes obsolete! I know that sounds obvious but it shows that things become obsolete for other reasons – often for marketing reasons rather than because they are “old tech”. It also explains why “obsolete” and “inferior” formats like Vinyl are having a revival and why Arduino is making 8-bit technology popular again. When you get enough people interested, support naturally pops up and the cycle feeds itself.

So with the idea that a device becomes obsolete not because it is old but because people stop supporting it, then if I wrote new software and created new accessories could I make this device relevant in my digital life again? It is an interesting theory but before I can attempt such a thing I need to breach the digital island and build a bridge. I need to swap files between the Psion and my Macbook Pro. This is what I’ve been working on most recently, sometimes to the point of obsession.

Perhaps it doesn’t make sense to most people – why focus on something that only perhaps a dozen people will benefit from? I suppose I find it an interesting challenge because I have acquired a number of skills over the years such as circuit board design, 3D printing, knowledge of Bluetooth LE and ESP8266 Wifi chips… and I think I might just be able to do it… just maybe!

While searching for Psion-to-Serial cables on eBay I also bought a Psion Series 3mx and the associated cable (also known as the Honda cable) as it was just too tempting. Now I had to find a way to connect both devices up to my Macbook Pro.

My approach was to purchase a USB serial board from China (also off eBay) to use with the 3Link cable for the Psion Series 3a however for the Psion Series 3mx I needed another approach as the Honda cable arrived without the chunky DB9 connector (that connector that most people think of when they think serial) instead it just had bare wire ends to solder. In the end, I used a Sparkfun TTL 3.3v serial USB board that I had for use with programming tiny Arduinos but not without some extra circuitry…

TTL stands for Transistor-Level Logic and uses +3.3v to represent a logic 1, and 0v to represent a logic 0. RS232 typically uses +13v for logic 1 and -13v for logic 0. Hopefully, you can see problems will happen if you connect them straight up and there is the potential to cause some painful damage. After some searching, I settled on a MAX3232CPE chip which uses charge pumps to shift the voltage levels and only required some extra capacitors which were sourced again on eBay. I set it all up on a breadboard and got garbled output – my heart sunk. I was just about to throw everything when I realised that chip pin numbers go counter- clockwise. I’d wired the right-hand side back to front! 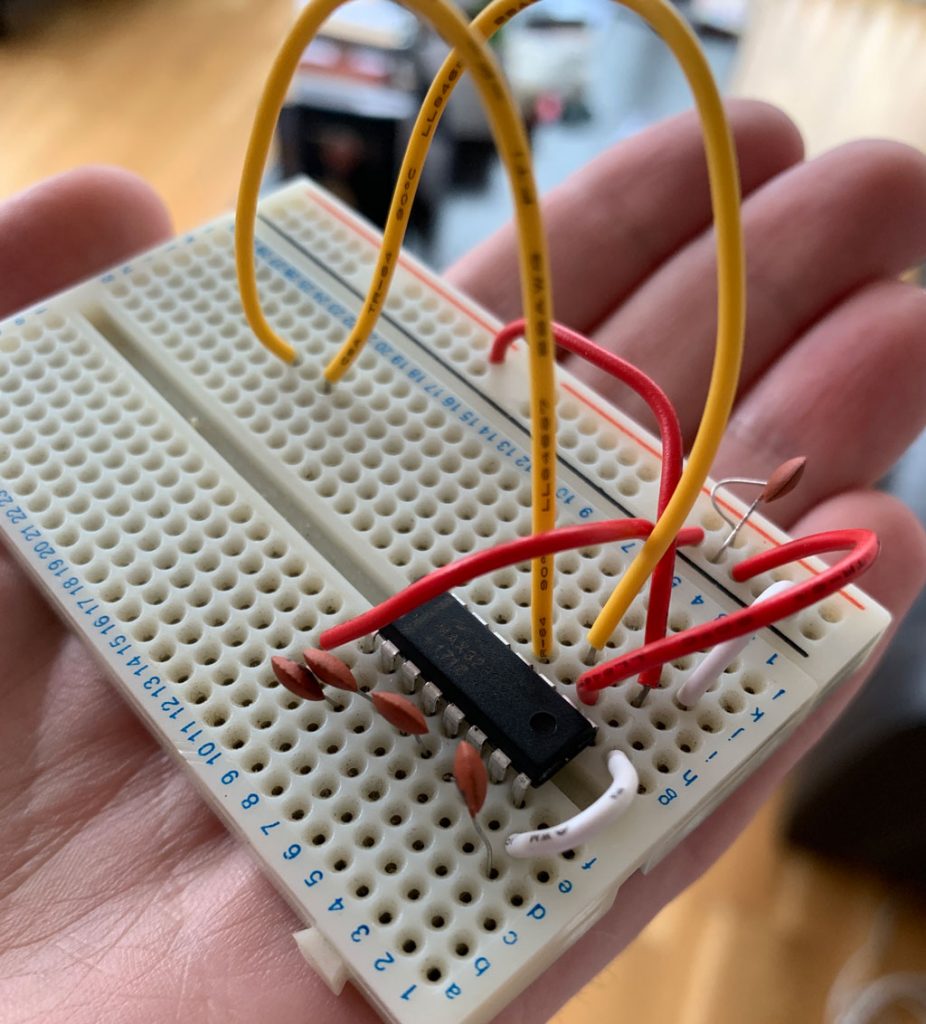 Finally, after a lot of planning, setup and breadboard adventures, I opened up my Macbook Pro, ran the screen command and could communicate with my Psion though the built-in Comms app. Once it was all corrected I started to get output from the Series 3mx which was an ecstatic feeling! I typed back HELLO PSION on the screen session. The tiny little grey Psion screen printed it back! YESS!!

After some experimentation, I managed to swap a file between a Psion and my Macbook Pro. The Psion Comms app supports a file transfer protocol called YMODEM. I downloaded a Mac app called IOIO Serial that supported this ancient protocol too and got them talking. In fact just to prove a point I wrote this blog post on my Psion 3a and transferred it and yes it’s 2019!

I had to print this blog post as a file using the built-in postscript printer and then I transferred it to my Macbook Pro. I’m impressed that such a tiny device could produce a Postscript file and that it was so easy to open on osX. As a handy tip for anyone else trying – just rename the file from P.lis to P.ps and the Preview app will automatically convert it into a PDF.

I achieved success – I managed to connect up my Psion to a modern device and this blog post is proof of that! I still have a long way to go but I’m happy to take the win. I intend to build a better cable – possibly designing a circuit board for it too. I’m also going to attempt to build a USB charge cable for the Psion since I’ve been using batteries so far!