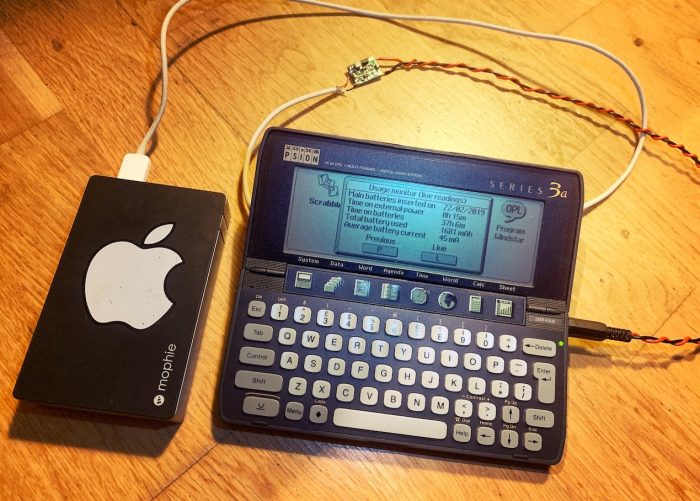 After my previous success recovering data from my old Psion Series 3a palmtop, I decided I needed to bring some of the cables into the 21st century. While batteries usually last weeks with the Psion, using it on my desk was frustrating as it powered down after 5 minutes to save battery power. Therefore I decided the first cable to work on was the mains adapter and what better way to update it than make it a slim ultra-portable cable powered by USB – I could then use USB wall plugs, my MacBook Pro or even a humble USB power bank to power my Psion. Time to get out my wire snippers and wait for the soldering iron to warm up!

The original power adapter was a big bulky brick. It delivered up to 250mA of power at 10 volts which is surprising as the Psion Series 3a has 9v embossed on the side of the casing next to the power socket – it probably uses a forgiving voltage regulator internally. I checked the Psion user guides – the Series 3a requires 9-10v 150mA while the Series 3mx needs a full 250mA – this is most likely for the faster processor, infra-red port and backlight. This was good though, I could work with it, I just had to find a way to now get the USB port to deliver 9-10 volts with a current draw of 250mA or less.

The common household USB port can deliver up to 500mA of current at 5 volts and using Apple USB wall plugs can supply 1 Amp. Great, the current was more than enough but the voltage needed to be double what it currently was. Luckily there are few ways to double voltages, obviously with current trade-offs (since P = I x V). One way would have been to use a step-up transformer. Step-up transformers use AC current to generate a changing magnetic field in a coil of wire wrapped around an iron core, while another coil of wire double the length is wrapped around it too which has the effect of inducing a voltage double the size in the other coil. That’s great but then the problem becomes turning my DC current into an AC current and rectifying it back to DC on the other side. This all seemed a little too hard work for such a simple cable.

I also looked at using charge pumps. These are clever little circuits that switch between charging two capacitors, while the capacitors are concurrently being used in series. As the capacitors are in series it doubles the voltage! This was perfect and while I was looking at using a 555 timer chip to switch between charging two capacitors, I discovered various pre-built voltage doubling chips existed. Unfortunately most didn’t provide enough current only managing a paltry 50mA or so.

Eventually, I discovered that a factory in China somewhere was selling tiny boost modules on eBay very cheaply. They can deliver up to 600mA which is more than enough and have good enough efficiency. A few clicks and a month later my modules arrived.

I managed to recycle an old USB iPod cable that I didn’t want anymore. A few snips later and I had exposed the cables ready for soldering. In hindsight, I wish I had used a black cable rather than a really old and dirty white Apple one but I know for next time.

The Psion Series 3a/c/mx model accepts power via a female barrel jack with the centre pin being negative. I was concerned that this was a proprietary socket and that Psion had stopped making them long ago. Luckily as it happened, I was sitting at my desk with my Flight Simulator Yoke at the other end of the desk when I noticed the power plug which I had disconnected and was lying on the desk. It looked very similar in size to the Psion socket. I checked the voltages and current on the back of the wall plug. They didn’t match but with the power off I plugged in the adapter into the Series 3a and was pleasantly surprised to discover it snapped in fitting snugly. The barrel jack was a standard plug! One matching 1.3mm x 3.5mm x 9mm dimensions exactly. A few clicks and a couple of days later the plugs arrived.

Soldering it all together 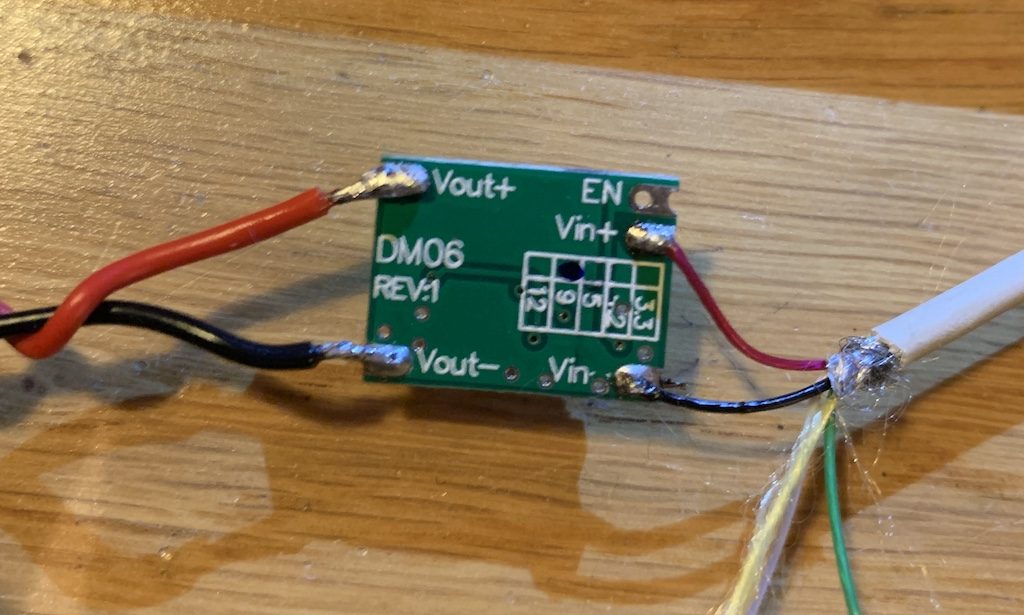 When all the parts arrived I started to solder the USB plug to the boost module – this went well. For the Psion Barrel jack plug, I made up a cable and soldered them on. The plug isn’t a right-angled one like the original but it was good enough for building a prototype.

Now with everything soldered I plugged in the USB plug to a USB power bank figuring that if there were any sparks or short-circuits it wouldn’t be able to take my MacBook Pro with it. Next, I tested the barrel jack plug voltages with a multimeter. The voltage read a humble 4.9 volts, a far cry from the 9-10 volts I was expecting. On further inspection it seems the boost module has an enable pin that needs to be driven high or soldered to Vin to enable it, otherwise, the voltage just gets passed straight through as it is i.e. not doubled. A few dabs of hot solder later and the barrel jack plug was reading 9.1 volts! 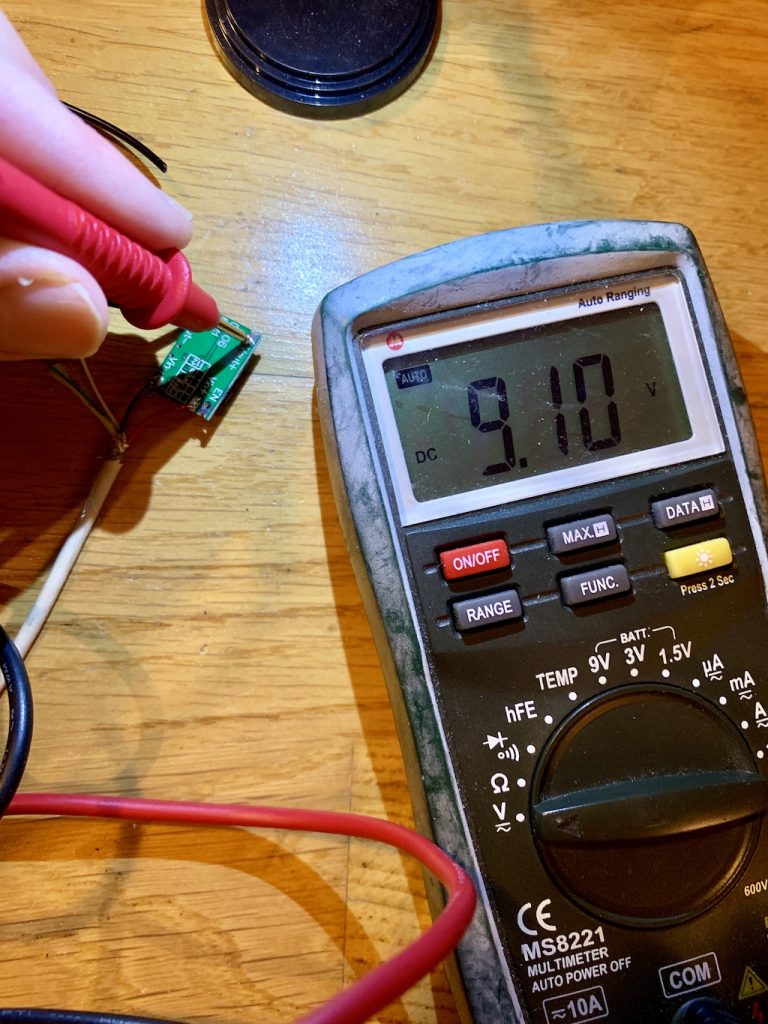 With the cable now complete I plugged it into the Psion Series 3a and instantly saw the glowing green power indicator LED light. I also noticed no smoke! It was probably the first time I ever got truly excited about a mains adapter. Here was a device that hadn’t seen the mains power for over a decade and I’d built a modern power cable for it! I quickly disconnected the USB cable from the USB charger and up to my MacBook Pro. Again, it lit up with a green glow which was such a good feeling. I went into the main menu and checked the Battery dialog – it read as having external power. Mission accomplished.

I’ve since analysed the cable and the Psion Series 3a using a thermal camera. There is a slight warming of the power components but it’s only a few degrees above room temperature or so which is more than acceptable – on touch you would not be able to tell. In addition, I used a USB Doctor from eBay which indicated the current being used – for typical usage the current draw is rarely more than 80mA however it all depends on what you are doing with the device at the time. 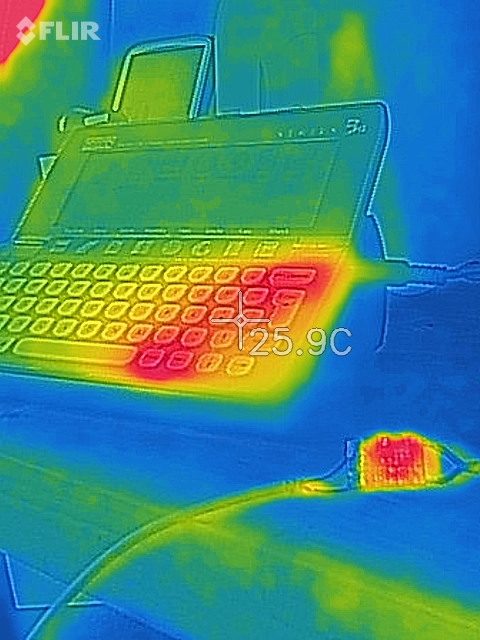 It feels really good to have created a modern power cable for this ancient device. It makes it considerably more usable in modern times as nearly everything has USB and there is no longer any need to carry around a heavy wall plug.

Now I have the prototype I intend to replace the USB cable to a black one and 3D print an enclosure for the electronics in the style of the Psion 3Link – if nothing else to grip the cables to reduce the strain on the solder joins and circuit board. Keep watch for a 3D printed update. 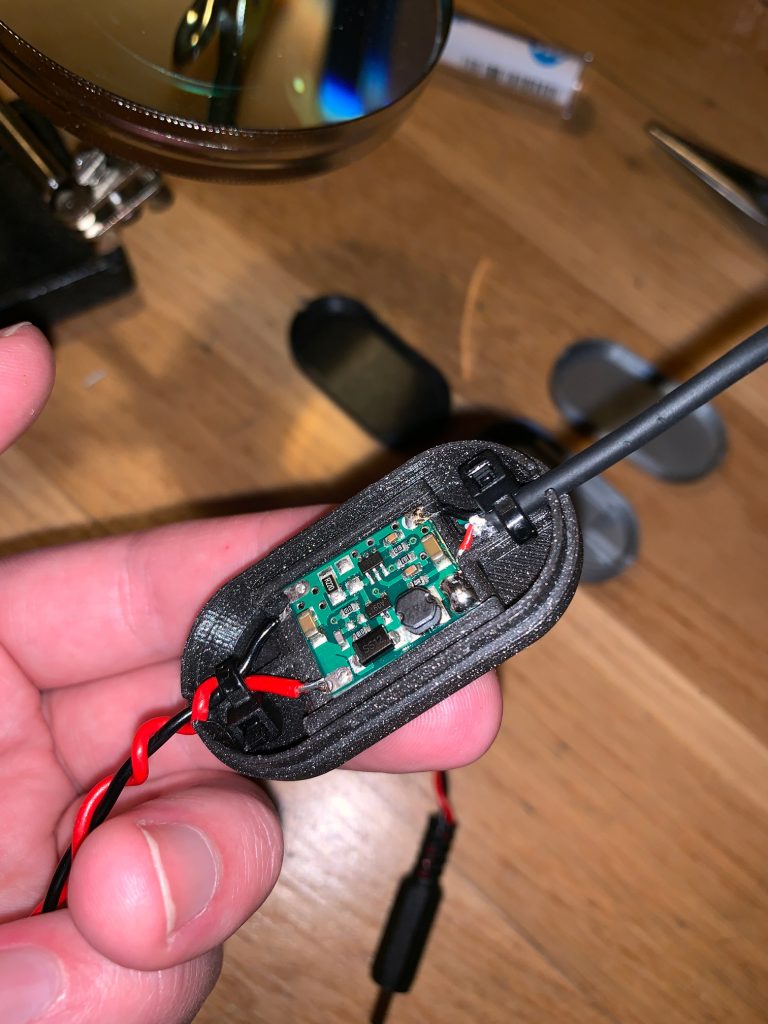 So I’ve had my 3D a few weeks now and I’ve been able to create a 3D-printed enclosure that snap-fits together tightly with no screws. I designed it using Fusion 360 and printed it on my newly acquired Original Prusa i3 MK3S.

I went through several prototypes. Below you can see my first “open sled” version where I was experimenting with a raised platform and cable-tie grips. 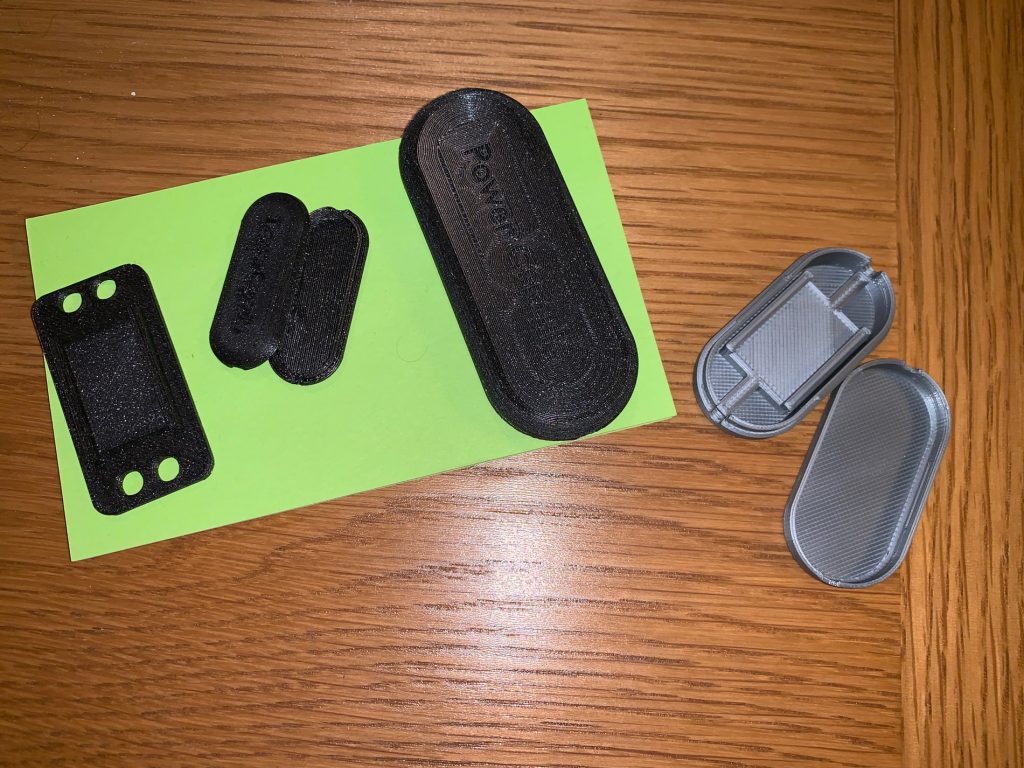 Various 3D-printed prototypes going through to the final version, which is on the right

For the final version, the enclosure grips the cables at each end using cable ties too but is more condensed than the original prototype. It also has a raised platform with a channel the circuit board sits in snugly. The snap-fit mechanism I used worked out great too. 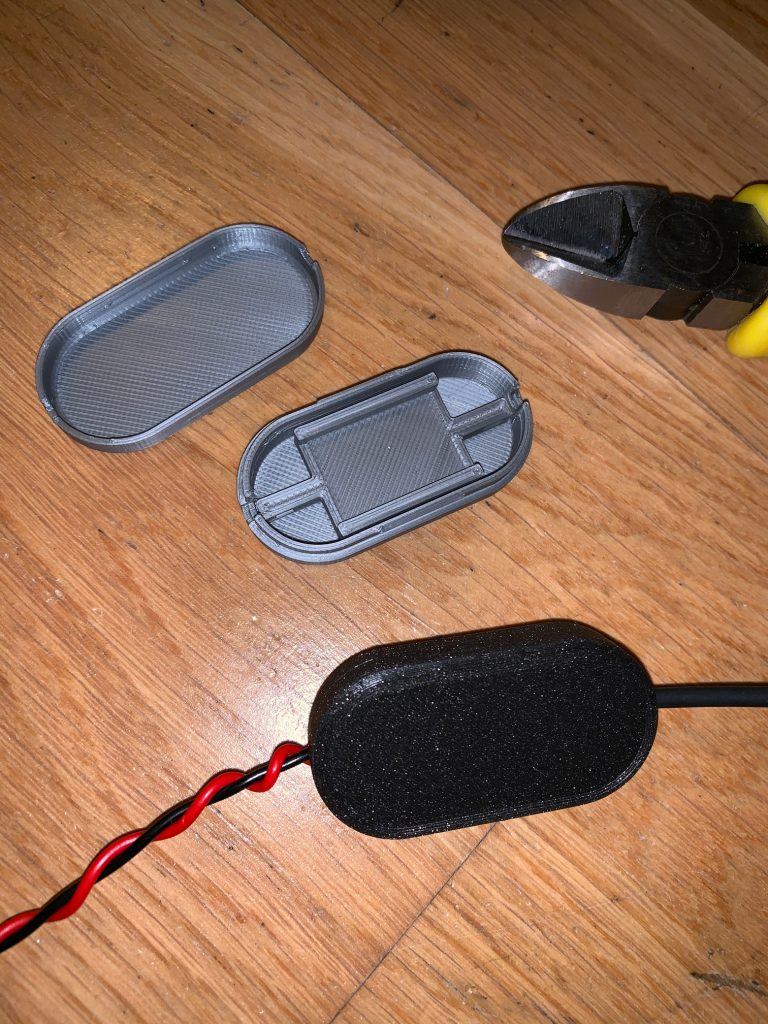 I want one too!

So you happen to still be using a Psion Series 3a/c/mx too and would like a fancy, modern USB power cable? I may be convinced to make you one but they take up quite a bit of my time ordering parts, soldering, printing housing etc and will be priced appropriately. I’m just warning you not to expect economy of scale prices. Contact me if you’re interested.